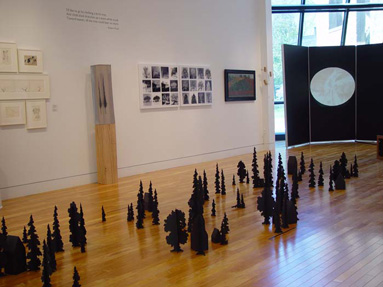 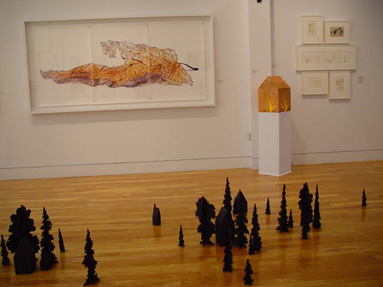 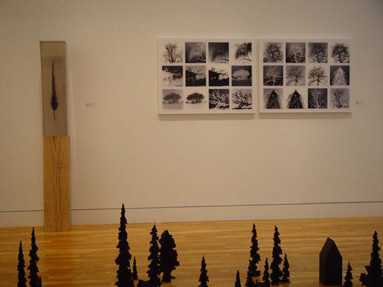 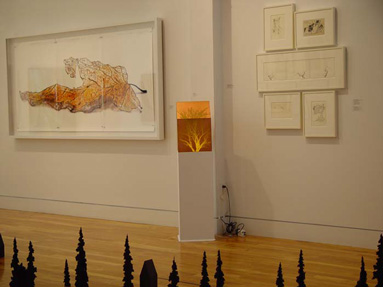 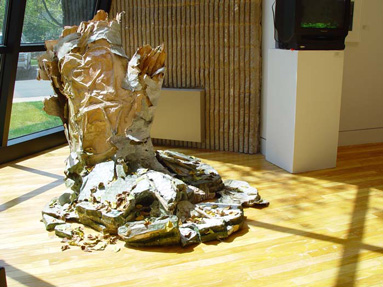 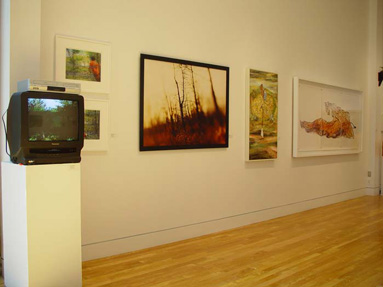 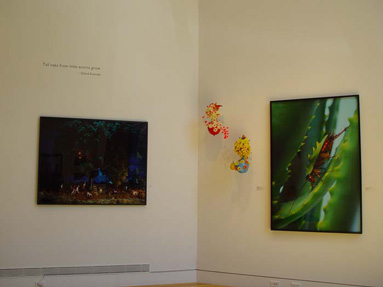 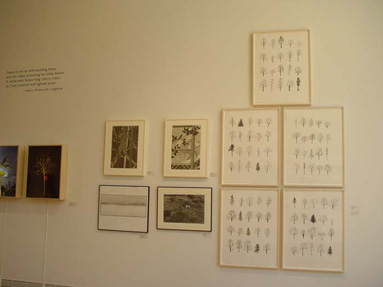 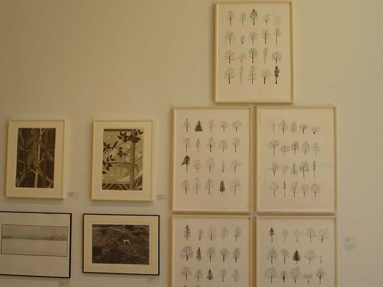 The Among the Trees exhibition delves into the simple observation that the tree has abiding artistic appeal as both metaphor and muse. Like the tree – whose abundant branches lead to a single column, only to then branch out into a complex network of roots not seen to the naked eye – this exhibition centers on the duality between the diverse yet like possibilities that stem from a single subject. Like the forest, this exhibition reveals many multiples each of which can stand on their own, but which together provide a rich environment for the mind and spirit.

Contemporary themes, such as the tree serving as a global barometer, are explored through works in painting, large scale photography and video by Michele Brody, Heiko Blankenstein, Ron Rocco, Sarah Bedford and Armando Morales. These works alert the viewer to the growing environmental distress resulting from humankind’s disrespect for nature. Likewise: Amy Wilson’s intimate watercolors feature trees with personal inscriptions relevant to our global ecological conscience; and Kon Trubkovich’s labor-intensive graphite drawings provide quiet commentary on the impact of technology on the landscape, revealed through a series of replicated tree stills taken from endless footage shot from a moving vehicle.

There is the timeless sense of awe for the sheer beauty of trees. In his celebrated series, Central Park Trees, documentary photographer Bruce Davidson draws our full attention to the magnificence of the trees blanketed by an intense winter frost. Jeff Grant creates sprawling, multi-media installations of miniature forests alongside delicate ink drawings on vellum, which celebrate mankind’s interface with natural beauty. More circumspect, Katie Holten and Dustin Yellin both underscore the tree’s inherent charm mindful of the tree as rare specimen. While both often assemble their art in groups that mimic the display of various historical species, Yellin uniquely draws directly on to the surface of multiple layers of poured resin, while Holten works traditionally in saturated pools of controlled ink on large sheets of parchment paper.

Some are more interpretive, intellectual, or analytical. The collaborative team Doug & Mike Starn take a scientific route to arrive at a spiritual place. They employ video and mixed media photography to investigate the absorption of light, revealing in the symbolism of a single tree the effects of time on all. Roberley Bell, Valerie Hegarty, Jason Middlebrook and Eric Swanson analyze the interplay between nature and artifice, with convincing replicas of plant elements and birds strangely transplanted from the expanse of their natural habitat to the confines of an interior exhibition space. In her futuristic landscapes, photographer Susan Wides incorporates elements of light, distortion, multiple reference points, and the duality of motion and serenity to challenge our notion of fantasy versus truth.

Sometimes, whimsy or irreverence come into play. Lee Walton references the performance aspect of the 1980s Fluxus movement in his video piece entitled Trees. Walton invokes a series of comically scripted dramas involving the reaction of casual observers to the too-neglected trees in their neighborhood. Yurken Teruya works with a variety of recycled materials that create a miniature natural landscape crammed within the interiors of shopping bags! And Elliott Erwitt captures a curious moment of dialogue between a small dog and a newly planted tree.

More than once in this exhibit, trees are used to evoke troubling associations. Photojournalist James Nachtwey approaches the tree as silent witness of war in his 1984 snapshot of Salvadorian children seeking shelter from pervasive violence in the shadow of a nearby tree.

Among the Trees realizes that visual artists do not have a monopoly on the tree as metaphor and muse. The exhibition will feature excerpts from a selection of poetry by Emily Dickinson, Edna St. Vincent Millay, Walt Whitman, W.B Yeats, D.H. Lawrence, and of course Robert Frost. Religious and folklore imagery is integrated into the exhibit, as well. Among the Trees invites its audience to identify with the enduring love affair between the creative spirit and this universal icon. 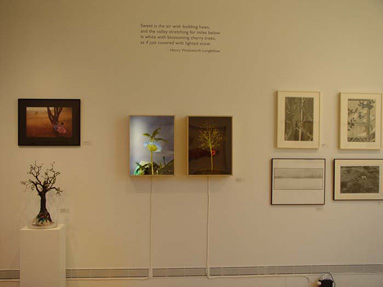 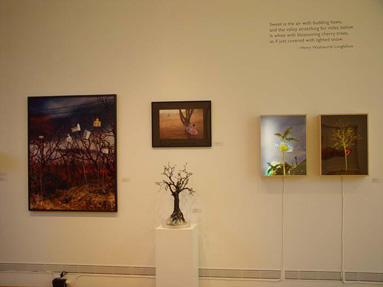