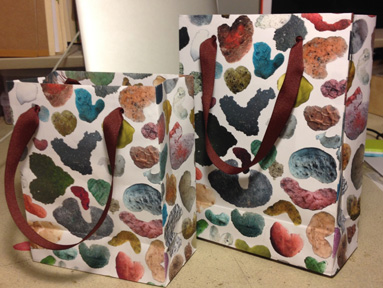 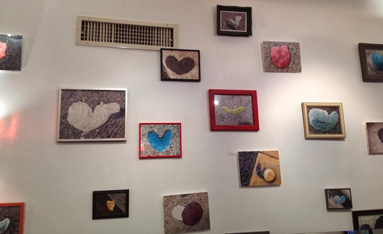 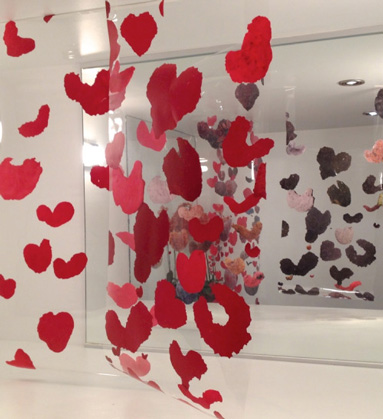 I am attracted to discarded, industrial, mass produced materials in our life, such as chewing gum on the street, pockets from used clothes, bathroom tissue rolls, envelopes with windows, fliers. It is like finding unexpected treasures in rejected things. Come view artwork by Niizeki Hiromi on display at our salon.

Fabio Scalia Salon + Art Space is pleased to present LOVES, an exhibition of mixed-media works by the New York-based artist Hiromi Niizeki. This is Niizeki’s first solo show with the salon, and the artist will be present at the opening reception at 155 Montague Street Brooklyn, NY on Wednesday, January 8th. 7-9pm

A voracious consumer and self-styled producer of American + Asian pop culture, Niizeki works in a vast range of media, settings, and artistic disciplines—photography, sculpture, digital imagery, installation, to name a few. Her mixed media installations, sculptural objects and assemblages, also embody a keen interest in exploring the use of various types of existing and handmade papers. Over her career, she has created numerous participatory works that incorporate the repurposing of common, and often overlooked materials, she continuously collects from our every surroundings. LOVES project was inspired by her frequent trips to the playground with her young son. She discovered the accumulation of vibrantly hued wads of chewing gum that had been discarded, each unique in its shape and color, ever changing with time, forming abstract patterns on the ground as far as the eye could see. Their spectrum patterns of color and form compelled her to produce a body of work that transforms this often frowned upon detritus into stunning works of art. Her inspiration led her to an obsessive documentation of gum wads found in all the five boroughs of New York City which are carefully woven into a continuous tapestry of technicolor dots. As she documented endlessly using just her own cell phone camera, she began to discover the many inadvertent heart shapes that had been recorded into the ground by happenstance. The LOVES project has since developed into a global invitation to the public at large to participate in this treasure hunt with the artist. Niizeki Hiromi and Fabio Scalia Salon invite you look for GumHearts in your area and capture it with your cell phone camera. Send your images to me at https://www.facebook.com/Gumhearts, or e-mail to https://www.facebook.com/Gumhearts and become part of the creative process.  www.niizekihiromi.com

Niizeki, Hiromi was born in Tokyo, Japan. She presently maintains her family name of Niizeki. She began her studies at Musashino Art University in her native Tokyo before moving to New York City in 1988 as her primary residence. Niizeki has exhibited her work both domestically and internationally at many prominent art institutions which include; The National Museum of Art in Johannesburg, South Africa,  Palo Alto Junior Museum, Palo Alto, CA, Memorial Art Gallery, The University of Rochester, Rochester, NY, Highways Performance and Arts, Los Angels, CA,  Cave Art Space, Brooklyn, NY, La Foret Museum, Tokyo, Japan. Her works is widely known and exists among a number of high profile collections.  Her work has received critical acclaim by art critics such as; Holland Cotter of The New York Times, Stuart Ferguson of the Wall Street Journal and Jane Ingram Allen for Sculpture Magazine. She has participated in a number of Arts Residencies which include Clock Tower Gallery@P.S.1 Contemporary Art Center, New York and Governors Island Studio Program at Children's Museum of the Arts, New York.