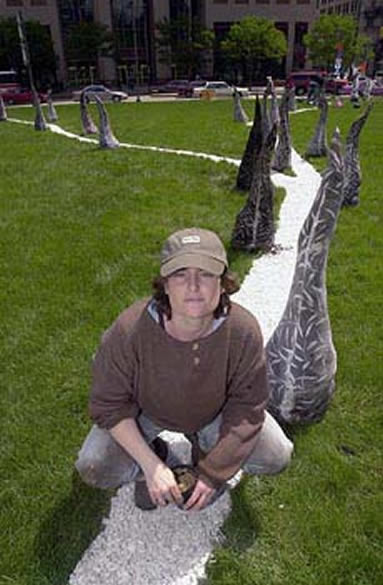 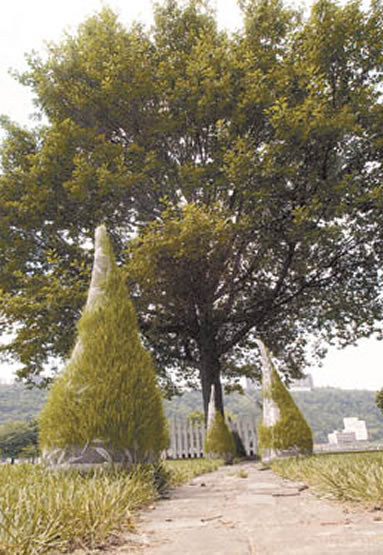 Roberley Bell uses the park-lands as an examination of the human desire to order and control nature by placing synthetic objects in an organic environment. Juxtaposing artificial against natural. For Bell, the formally designed outdoor spaces, such as public grounds and gardens are now a controlled environment, And a way to make sense and order of the space around us. Bell’s choice of objects and their placement reflect her view of the interior home as a feminine space and the exterior as a male dominated territory. Giant vase like vessels festooned with artificial flowers and astro-turf, mastered from steel frames generally perceived as fertile forms, are placed in the manicured outdoor garden commanding their place among an almost overwhelming landscape. A Surreal and pleasing tension is unearthed, creating an almost seamless Arcadian dreamscape.

Michele Brody creates site specific installations and public works of art that comment on the passage of time through the relationship of nature and architectural history within the urban environment. The range of her materials and techniques vary from the creation of copper pipe structures that transport water for hydroponic growing systems within fabric and hand made paper, to walkways of cast concrete pavers interlaced with grass. Her work invites the viewer to correspond by entering through the threshold of an architectural passageway, a path in the woods or along a city sidewalk. For Brody the walkways are much more than the manipulation of a given space we are meant to pass through. Instead they symbolize space - physical or conceptual - that exists between two distinct locations, categories of meaning, or states of being. Known as the Limen. The threshold through which one passes en route from one state to another. “It is within this interim space of the Limen that my work unfolds, and creates its very structure among such dualities as Nature/Urban, Art/Design, Installation/Architecture, Object/Artifact, and Visual/Visceral”

The decision to pair both of these women was for me the most natural of conclusions. Struck by their symbiotic reverence and concerns with the issue of nature and how we interact within in it, and their play on what is real and what is fabrication and fantasy, lead me to investigate the them “Garden Paradox”. What we see is not always necessarily what is before us, and as we explore what appears to be nature at its most fruitful and elegant, upon closer inspection we discover the visual pun of man made materials strategically arranged in a seemingly unforced setting.

Roberley Bell received her Master of Fine Arts degree from the State University of New York, College of Ceramics at Alfred University and studied at the Tyler School of Art in Philadelphia, the University of Massachusetts at Amherst (BFA) and the Institutio Allende, San Miguel de Allende, Mexico. She is currently Assistant Professor of Foundations and Drawing at the Rochester Institute of Technology, Rochester, New York.

Michele Brody received her Master of Fine Arts Degree from The School of the Art Institute of Chicago, Chicago, IL; Post Baccalaureate Certificate, from California College of Arts and Crafts, Oakland, CA; Bachelor of Arts Degree, from Sarah Lawrence College, Bronxville, NY and studied at Skowhegan School of Painting and Sculpture, Skowhegan, ME and the Architecture Program, at The Pennsylvania State University, University Park, PA She was the recent recipient of the New York State Council on the Arts, Architecture, Planning and Design Program-Independent Project award and the Manhattan Community Arts Fund, New York in the year 2000.