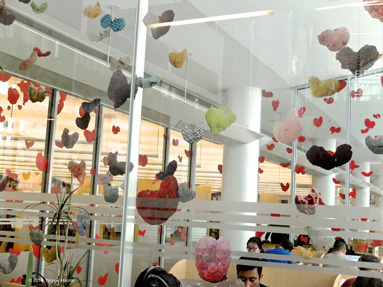 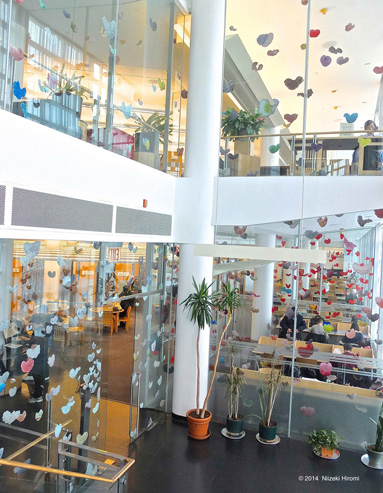 The Queens Flushing Library is pleased to present the participatory GumHearts installation entitled “LOVES” by artist and Queens resident Niizeki Hiromi. This is Niizeki’s first solo show with the Queens Library, and the artist will be present at the Opening Reception at 41-17 Main Street Flushing, NY 11355, phn: (718) 661-1200.

The Queens Flushing Library is the second largest U.S. public library, which serves over 2 million people. For her latest project, the Niizeki Hiromi has chosen to work in this non-traditional location as a way to connect with a much broader audience thereby making art accessible to all. For her recent project "Loves" she playfully responds to the institutions' expansive windows, high ceilings and stairways with carefully arranged vivid patterns of discarded chewing gum imagery that she has been collecting for the past several years from the streets and sidewalks of New York City's five boroughs. Niizeki considers this artwork, which is purposefully visible from both sides, as a way to encourage her audience to pay closer attention to the spaces they occupy and the things that are often overlooked among their surroundings. As a special interactive component to this exhibition, the artist invites those in her Queens community and beyond to actively participate in her creative process by looking for GumHearts in their own area and capturing them with their cell phone cameras. If you are interested in making a submission please send your images to the following website https://www.facebook.com/Gumhearts, or e-mail her at gumhearts@gmail.com and become part of this unique community art project.

The Participatory GumHearts Project “LOVES” was inspired by Niizeki's frequent trips to the playground with her young son where she first discovered the accumulation of vibrantly hued wads of discarded chewing gum, each unique in its shape and color, weathered by time, and forming abstract patterns on the ground as far as the eye could see. Their spectrum of color and patterns formed a compelling body of work that inspired the transformation of the often frowned upon detritus most of us chose to ignore. Niizeki's work transforms them into stunning and complex works of art. Her inspiration has led to an obsessive documentation of these endless gum wads found in all the five boroughs of New York which she has carefully woven into a vast tapestry of technicolor dots. Using just her own cell phone camera for documentation, she began to discover the many fortuitous heart shapes that had been formed on the ground merely by happenstance. Included in her work are the two thought provoking hearts from locations that directly relate to the artist, Fukushima and Brighton Beach, highlighting her personal experience with that nuclear tragedy and that of Hurricane Sandy. The LOVES project has since developed into a global invitation to the public at large, and invites all to participate in this universal treasure hunt with the artist.

Niizeki, Hiromi was born in Tokyo, Japan. She presently maintains her family name of Niizeki. She began her studies at Musashino Art University in her native Tokyo before moving to New York City in 1988 as her primary residence. A voracious consumer and self-styled producer of both American + Asian pop culture, Niizeki works in a vast range of media, settings, and artistic disciplines—photography, sculpture, digital imagery, installation, to name a few. Her mixed media installations, sculptural objects and assemblages, embody a keen interest in exploring the use of various types of existing and handmade papers. Throughout her career, she has created numerous participatory works that incorporate the re purposing of common, and often overlooked materials, that she continuously collects from her every surroundings. Her work as been exhibited both domestically and internationally at many prominent art institutions which include: The National Museum of Art in Johannesburg, South Africa, Palo Alto Junior Museum, Palo Alto, CA, Memorial Art Gallery, The University of Rochester, Rochester, NY, Highways Performance and Arts, Los Angels, CA, Cave Art Space, Brooklyn, NY, La Foret Museum, Tokyo, Japan. Her works are widely known and exist among a number of high profile collections. Her work has received critical acclaim by art critics such as: Holland Cotter of The New York Times, Stuart Ferguson of the Wall Street Journal and Jane Ingram Allen for Sculpture Magazine. She has participated in a number of Arts Residencies which include Clock Tower Gallry@P.S.1 Contemporary Art Center, New York and Governors Island Studio Program at Children's Museum of the Arts, New York. www.niizekihiromi.com