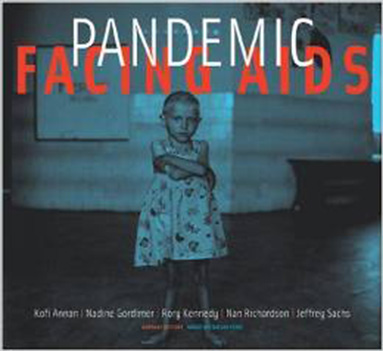 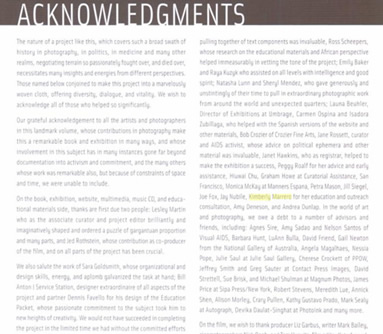 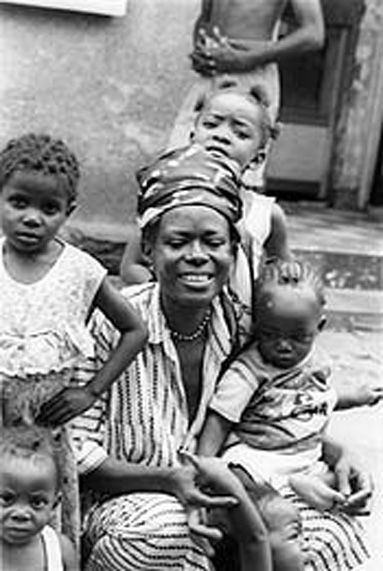 Experts now agree that HIV/AIDS is the worst epidemic humanity has ever faced. . . . In 20 short years, HIV has spread to every corner of the earth. Over 60 million people have already been infected, and of those, more than 25 million have died. . . . In the worst affected places, more than a third of pregnant women have been found to have HIV. Every day, more than 2,000 children are born with it, even though the world has the tools -- through drugs and pre- and postnatal care -- to make the transmission of HIV from mother to child a rarity.     -- Kofi Annan

Last month, the Guggenheim Museum's new Sackler Center for Arts Education hosted a modest but riveting exhibition on the global AIDS crisis. A traveling show organized by Nan Richardson, that premiered in Barcelona during the XIV International AIDS conference in July 2002, "Pandemic: Imaging AIDS" presents works and accompanying statements by more than 100 international photographers and artists from 50 countries. An abbreviated educational version appeared at the Guggenheim, organized by educational consultant Kimberly Marrero; the show as a whole, currently at the Philadelphia Art Alliance, is slated to tour through 2005.

The "Imaging AIDS" project has multiple facets. A documentary film,Pandemic: Facing AIDS, directed by Rory Kennedy, reports on the challenges facing five people living with the disease in India, Russia, Thailand, Uganda and Brazil; it was shown on HBO last June. The AOL Time Warner Foundation has underwritten a multilingual website,www.pandemicfacingaids.org and a free educational package that is distributed to schools. There is even a CD of international recording artists entitled Pandemic: Music for a World Without AIDS.

And a book of photos by Nan Goldin, Andres Serrano, Cindy Sherman and many more artists, along with essays by Annan, Nobel laureate Nadine Gordimer and economist Jeffrey Sachs, has been published by Umbrage Editions and Moxie Firecracker Films. Particularly stirring are works by just two of the many artists who were lost to AIDS: David Wojnarowicz's 1993 self-portrait, in which only the artist's face remains visible above ground, and Robert Mapplethorpe's apocryphal self-portraits from 1988.

The exhibition expresses the human dimensions of the tragedy and also demonstrates hope, resilience and activism. Gideon Mendel's photograph of the Treatment Action Campaign march at the XIII International AIDS Conference in 2000 in South Africa shows the power of collective action. This event, leading to greater community activism, has effectively galvanized treatment availability of Antiretro-virals in South Africa. In the Democratic Republic of the Congo, a group of six HIV-positive women have documented their experiences dealing with the social stigma and isolation that comes with contracting HIV, and what they ultimately can do for each other, including documenting their struggle, as in the photo "Angelique: This woman hopes to lead an active life, despite infection."

After long denials of the HIV epidemic, China is now admitting to 750,000 cases of HIV, which the UN and the World Health Organization revise upward to 1.5 million. David Butow's series of photos across China show, in subtle ways, how HIV may have been transmitted from migrant workers to prostitutes, or by the poor, whose blood was sold, mixed and then infected others by transfusion. In Thailand, the 100 Percent Condom Campaign has reduced infection by two million; Francesco Zizola's black-and-white photo shows a UNICEF-sponsored distribution of condoms in a Bangkok middle school in 1996.

Included here are also more aggressive, directly confrontational images. Gran Fury's When Did You Forget? (1989) is as attention-grabbing as any top-flight advertising campaign, as is Nancy Burson's 1991 comparison of a normal and an HIV-infected T-cell. Annie Leibovitz's portrait of Rebecca Denison (1993), director of Women Organized to Respond to Life-Threatening Diseases (WORLD), shows a woman activist, her body painted with phrases like "never give up hope" and names of lost friends, her red-colored hands placed over her heart. Doug and Mike Starn's portrait of the late artist Mark Morrisroe, made in 1985 before he died of an AIDS-related illness, is a dark silhouette of the sitter made from fragments pasted together with tape -- a shadow or void that the artist used to inhabit.

Photographed by Genin Andrada, a man named Santiago Rodriguez from Spain remarked not long before he died, "I have cancer, seven tumors, anemia. . . and I keep fighting like Don Quixote. The equation they want us to believe is false; AIDS does not equal death."

Let's hope (and act on the premise) that he was right.