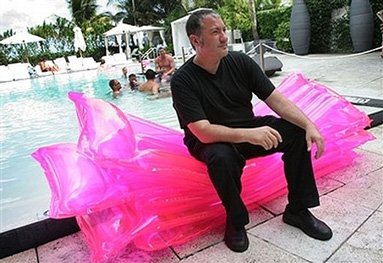 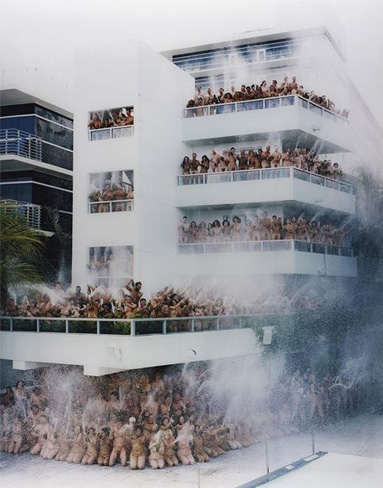 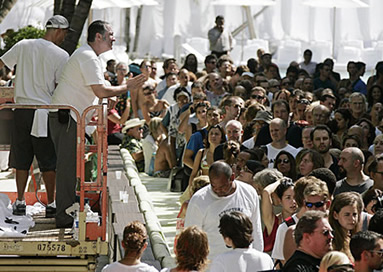 Spencer Tunick is recognized world-wide for his elaborately posed still and video images of multiple nude figures in public settings. His temporary site-specific installations have taken place around the globe in cities which include Amsterdam, Barcelona, Lyon, Melbourne, Mexico City, Montreal, New York City and Santiago. Tunick gathers volunteers to take part in his projects, which in the past have totaled anywhere from 100 – 18,000 participants. His work combines sculpture, performance and land art that consistently features skillfully posed nudes juxtaposed in urban and natural environments. For this current series the artist draws his inspiration from this unique Art Hotel and its vast contemporary art collection with a carefully staged sequence of guided installations featuring numerous participants from the Miami area. The end result is the artist’s signature visual documentation of aesthetic tableaus which reveal a myriad of correlations that exist between the human form and its immediate surroundings. Using the Sagamore as his elaborate backdrop Tunick forever captures the unmistakable essence that is Miami Beach and this historic post-modern marvel from a variety of artistic vantage points.

About the Project: The Sagamore and guest curator Kimberly Marrero bring you this once-in-a lifetime opportunity to be part of Spencer Tunick's upcoming installation.

In exchange for taking part, you will receive a limited edition print of the installation. Participants must be 18 or older. You will only be nude for a short period of time.

To register please fully complete the sign up form. Chosen participants will be contacted nearer to the date of the installation with further instructions and arrival time.

The resulting photographs and videos made on October 8th will then be exclusively exhibited in December during Art Basel Miami 2007 at the Annual Sagamore Brunch hosted by Cricket and Martin Taplin, Martin Z. Margulies and Constance Collins, The Bass Museum of Art, Patricia and Philip Frost Museum at FIU, Lowe Art Museum, Miami Art Museum, Museum of Contemporary Art and The Wolfsonian.

Contemporary artist Spencer Tunick is widely celebrated for his elaborately posed installations of multiple nude figures within interestingly select public settings. His temporary site-specific installations have taken place across the globe in cities including Lyon, Melbourne, Mexico City, New York and Barcelona to name a few. Tunick gathers legions of volunteers to take part in his elaborate installations which in the past have drawn numbers well into the thousands.

Creating his seminal temporary site-specific landscapes involve the recruitment of many nude figures arranged in specific public sites and follow on the tradition of the popular art of the early 70's known as land art. Embedded directly in the landscape the artist assigns the nude form as a functional art material devised to intervene within its natural surrounds as a way to transform it. The final result, also drawing from the tradition of recording the ephemeral, the artist creates a series of uniquely exquisite video and photographic documentation.

The poetic whole culminating from this sea of individual figures which are arranged in a sculptural way, further challenges traditionally held stigmas associated with nudity, privacy and social and political issues surrounding art in the public sphere.